A Library “Cooler than the Mall” 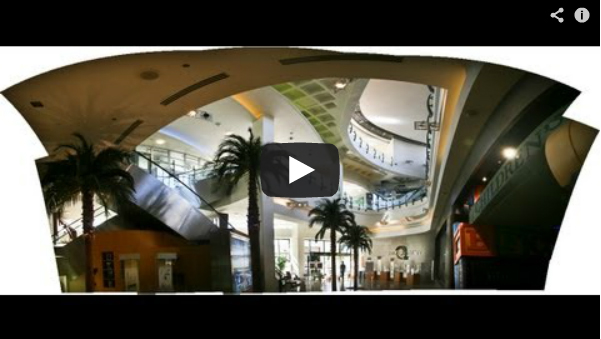 How does one get people to come and use a public library, at a time when information sources are decentralized and can be retrieved through cell phones, tablets and computers? “Come to experience it;” that is the Cerritos Library’s “active ingredient.”

The Cerritos Library emerges as a challenge to the very meaning of what a library should be today. Located at the center of a sprawling suburbia of over ten million people, it carries a message of multiculturalism.  Cerritos’ demographics show a mix of approximately 60% Asian, 23% white, 10% Latino and 7% African American.

During its first six weeks of operation, attendance tripled, library cards went from 800 to 5,000 and circulation increased from 80,000 to 136,000. People come. Sometimes it is hard to find a seat throughout the entire three-floor building. How did this happen?

In 1999 the architectural firm of Charles Walton Associates’ was commissioned to work on a program based on updated themes of education and a vision for the future. The plan included additional 42,000 square feet and called for hundreds of computer workstations and ports for high-speed Internet access. The design melted a total of 88,000 square feet (8,220 m2).

The inauguration of Frank Gehry’s Guggenheim in Bilbao in 1997 shook the imagination of architects around the world. The use of titanium for cladding had never been done before. The timing was right for domestic innovation. The Cerritos Library became the first building in the United States to use titanium – in a golden version – for its exterior.

The $40 million eclectic reincarnation appealed to fantasy as a form of engagement. The “Save the Planet” children library includes a 15,000-galon saltwater aquarium, a model space shuttle, a lighthouse, life-size dinosaur and a made-to-scale rainforest and planetarium, a little theater and an arts and crafts room.

A “user-centric experience” was created for the ground floor. It includes a faux craftsman arches portal to the “Old World Reading Room,” with a holographic fireplace and chandeliers. The Art Deco “Main Street” houses a local history room, a souvenir store and the circulation desk. A split level leads to either the “Great Room,” where paperbacks, periodicals and newspapers are located. The “World Traditions” area houses the Multimedia room.

A First Ladies Collection honors Lady Patricia Nixon, who spent her girlhood in its community. It shows photographs of the United States’ First Ladies since the 18th Century. 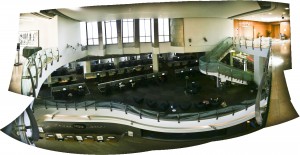 An escalator leads to the “21st Century” level. It houses 200 computer workstations and includes 1,200 laptop ports and a 300,000-volume book collection (five volumes per Cerritos’ resident!) Undulating transparent railings on the second and third floors stimulate both transparency and fluidity of movement.

The third floor houses the “Library’s Board Room” for small meetings and teleconferences; the  “Hi-Tech Training Room, a multimedia learning environment that is setup in an amphitheater-like arrangement with tiered rows of comfortable computer training stations; and the  “Skyline Room,” with state-of the-art audiovisual systems, which can host events and banquets. An outside terrace offers a tranquil tree-top view of the Cerritos Center for the Performing Arts and Cerritos Towne Center.

The library also includes commissioned artworks. The front entrance is marked by “Illuminations,” a 10-foot tall sculpture designed and built by artist Terry Braunstein, which contains heritage photos of the city and mosaics to inspire the imagination of children.  Indoors one finds works by Lita Albuquerque, Dale Chihuly, Al Held, Hung Liu and Pat Steir, among others.

The Cerritos Library represents well the multiculturalism that it embodies. If “entertainment” is used to attract readers, it does the job. The mix sensitizes the user and opens doors to deeper learning. When teenagers talking about the library say that “it’s cooler than the mall,” a major educational objective has been achieved.

2 Comments on “A Library “Cooler than the Mall””