Posted by Rick Meghiddo on Saturday, June 9, 2012 · Leave a Comment 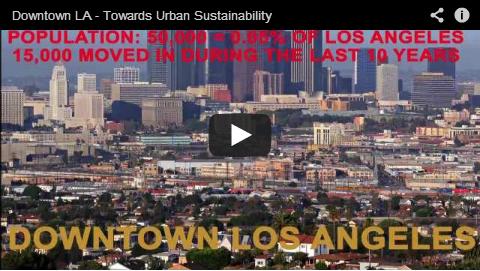 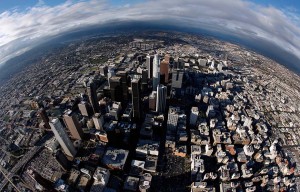 Los Angeles, more than a city, is a concept. The Los Angeles Concept.

are all Los Angeles, downtown being more or less the geographic center.

Cities are more than buildings; cities are people. Cities make it easier to watch and listen and learn. Because the essential characteristic of humanity is our ability to learn from each other, cities make us more human.

When you walk in Downtown LA you see people of all colors, sizes and shapes passing by. You can ask questions in Spanish without having to ask first “habla Español?”

You also see many good buildings. Some are dilapidated and badly maintained, but they have good bones. And good buildings make the city more human. When you look up at buildings that solve functional problems and also touch your soul, you say: Hey, I could live here!

The desert had a river, the Los Angeles River, until it got channeled into concrete.

The Tongvas Indians showed up 8,000 years ago. They chatted in a Uzo-Aztek language until the missioners baptized them and called them Gabrielinos.

In the 1920s LA it rivaled New York in rail lines. Banks were built. Theaters were built.

But then…the freeway was developed. The Red Car rail line was killed by our love affair with the automobile. Cheap land fueled the American Dream and sprawled it all over. It made the green backyard available to many. Hollywood made the American Dream contagious; it became the world’s dream.

The problem is that in today’s reality, with ten billion people on the horizon, “the American Dream as a physical standard for the whole species spells doomsday for us all.” (Paolo Soleri.) Repopulating Downtown LA seems to be a step in the right direction

Of course there are still huge human problems to be solved. Los Angele’s County’s 80,000 homeless sleeping on sidewalks has its headquarters in LA’s Skid Row.

And let’s face it: Downtown LA is not Manhattan. But Manhattan’s spring doesn’t last for twelve months. And it is not Paris’ beauty and grandeur. But Paris has many men named Philippe, yet doesn’t have 108 year old Philippe’s French Dip’s sandwiches with pickles just a few steps from Bukowski’s post office.

“It is the consumption-production-disposal cycle that is the killer of species in general and eventually of our own species…In this scenario, the city is the maker, suburban sprawl the breaker. The spatially and functionally segregated house is by physical necessity the most consumption-demanding of all shelters.” (Paolo Soleri.)

Downtown L.A. is walking baby-steps into the future.