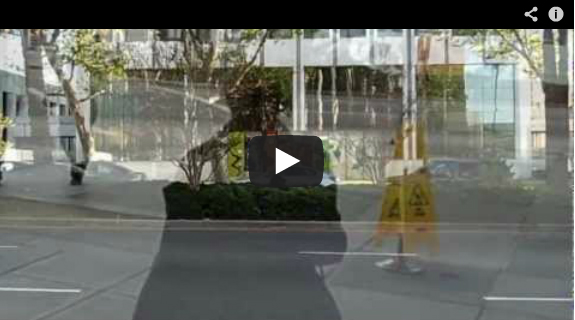 Just the day before, we had watched Fellini’s Juliet of the Spirits.The story of the rock and Fellini’s surreal world seemed to connect. Giulietta of the Borderlines was born.

There had been a lot of hoopla about “the rock,” a 340-ton granite boulder that made an arduous 105-mile journey from a remote Riverside quarry to the Los Angeles County Museum of Art. The artist, Michael Heizer, conceived a sculpture that, when completed, visitors would be able to walk through a slot with the boulder suspended 15 feet overhead. He named it “Levitated Mass.”

The shooting of Giulietta of the Borderlines started at Chris Burden’s Urban Light, a forest of over two-hundred restored cast iron antique street lamps that once lit the streets of Los Angeles. Now powered by solar energy and positioned between Renzo Piano’s Broad Contemporary Art Museum and the Ahmason Building, it has become the natural entryway to the museum’s complex.

Richard Serra’s Band at the ground floor of the Broad building demanded a gentle pace. The sculpture’s 70-foot-long, 13-foot high steel undulation, forming four cavities, carries a powerful architectural message of perception-in-motion, continuity and changing light. There is also a strong contrast between the austere, seemingly light and fluid form, and the actual solidity of two-inch thick steel forms, fabricated in Siegen, Germany.

Conceptual artist Barbara Kruger’s three-story elevator shaft digital print wall installation, some 94 feet high, is unavoidable. It represents a trespassing of borderlines between graphic art and conceptual messaging at an architectural scale. Kruger’s language, a mix of advertising text and sensational phrasing, is a critique to consumerism and unbound desire.

Chris Burden is still best known for his provocative conceptual art from the 1970s. His latest work, Metropolis II, points at an “architecture awareness” transformation. Although he claims to have no particular interest in transportation or urban planning, Metropolis II may have produced unintended consequences. It is a clear example of “space-use” versus anachronistically regulated “land-use:” the city jumping into space. It opens minds, particularly those of the many children attending the show.

The 1,100 toy-cars travel over 18 multiple-level roadways at 240 scale-miles per hour. Conceived as a criticism to the current car-conditioned life, the eclecticism represented by the model’s multiple building types gets closer to a more humanistic and diversified spatial urbanity.

“The rock:” it is hard to pass judgments before a work of art is completed. Can’t wait to see the final installation and shoot another episode.

When leaving the museum, we realized that our “crossing borderlines” visit was not over: a surreal  reality waited for us across the street.