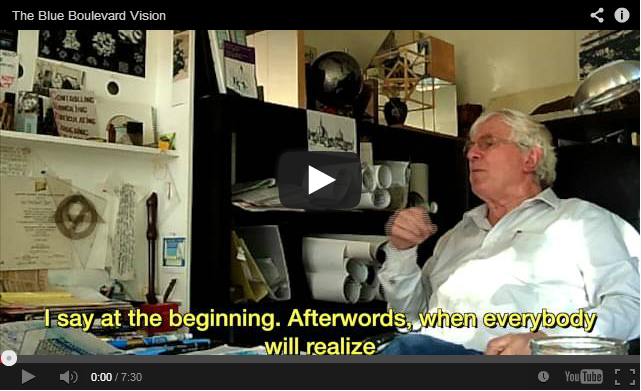 The pioneering spirit that shaped Israel’s thriving society and developed sophisticated technologies may once again launch a dream that could shake the imagination of many, rattle unbending ideologies and constructively transform the Middle East. Professor Michael Burt calls it “The Blue Boulevard” option. The idea is to build progressively a number of artificial islands along the country’s coastal plain that could absorb 3,000,000 people and infrastructure. Unlike artificial islands built elsewhere, Prof. Burt invented a new technology that uses only 7% of material to build the islands’ volume and is friendly to the marine ecosystem.

This technology is in full contrast with the ones used to build artificial islands and land reclamation around the world, which are all based on the use of filling materials. Since Israel does not have enough filling materials to build artificial islands in a conventional way, the use of prefabricated “Sponge Breakwaters” is a practical solution. Eventually, it could be used in similar situations elsewhere, considering that over 50% of the world’s population lives along coastal areas.

Prof. Burt’s ideas confront the “laissez-faire” and the implicated dangers of environmental deterioration, agricultural extinction and skyrocketing real estate prices. The time is ripe for such an approach because:

In spite of the gloom into which the world seems to be submerged these days, Prof. Burt’s artificial islands present a pragmatic vision for the future capable of easing many of Israel’s problems, trigger economic growth and stimulate a constructive alternative for the region.

6 Comments on “The Blue Boulevard Vision”