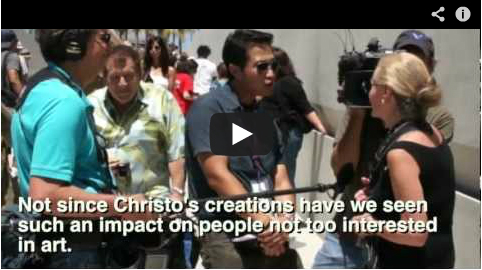 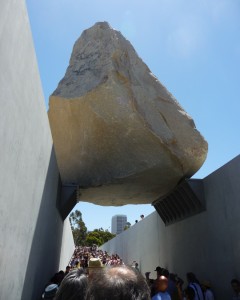 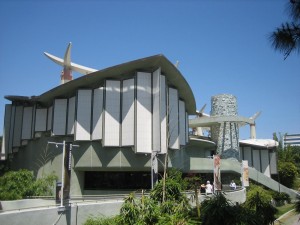 The official inauguration of Michael Heizer “Levitated Mass” at the Los Angeles County Museum of Art’s campus marks the culmination of an artist’s forty-four-yearlong Via Dolorosa.  When he first drew the idea, back in 1968, Heizer was twenty-four years old. Bruce Goff’s Pavilion for Japanese Art was inaugurated in 1988, six years after Goff’s death.

These two works, placed a couple of hundred yards one from another, couldn’t be more different. The newborn one is a late-blooming product of the Land Art movement. It is, to me, undetectably rooted in Marcel Duchamp’s revolutionary ideas, at an American scale. The pavilion’s trajectory can be traced back to Frank Lloyd Wight’s principles of Organic Architecture reinterpreted by Bruce Goff.

One is a manifestation of crude art aspiring at an architectural scale; the other seeks architecture-as-art and harmony between content, container and context. What links the two? LACMA’s grounds, an eclectic condominium of ideas,  in the middle of a highly diverse metropolis. Contradictions are fully present, as the times we live in.

The press loves the story: The 11-journey of moving, over 100 miles of a 340-ton granite boulder traversing 22 cities, from a quarry outside Riverside to LA; the $10-million project’s cost in a time of high unemployment when artists’ needs seem to be the last priority; and the artist, known only by a sophisticated elite, becoming a (world?) celebrity. It brings to mind the character played by Roberto Benigni  in Woody Allen’s last movie “To Rome with Love,” who is swarmed by paparazzi hordes asking banal questions, “What did you eat for breakfast?”

Humor aside, I admire the gesture. Not since Christo’s creations have we seen such an impact on so many people usually not too interested in art. I also admire Heizer’s tenacity. Yet I am less impressed by the artwork’s architectural scale. In the context that surrounds it, the rock is way too small. While the detail of its placement over the concrete walls may respond to engineering needs, is far from conveying a sense of “levitation.” Good design is much more than solving problems.

Goff’s pavilion, an inconspicuous gem in an area where neither  architects William Pereira, Holzman/Pfeiffer/Hardy or Renzo Piano were at their best, seemed to be ignored the day politicians and VIP’s showed up at the inauguration ceremony for a photo-op in front of a dozen of television cameras.  And yet, after twenty-four years, it hardly feels dated. Surprisingly small at 32,000 square-foot, it was completed by Bart Prince, a great architect in his own right. Goff, who died in 1982, was his mentor.

The building has to be experienced to be appreciated. Filming it can only stimulate a desire for walking through its space. The circulation system is simple, its access easy. It is said to have been designed with emphasis on function: to serve the unique Joe Price’s “Shin’enkan” collection of Japanese scroll and screen paintings, and “Netsuke” sculptures.

To me it scores an A+ on seven criteria: 1. Space quality; 2. Natural light control; 3. The perception of space in movement; 4. Character, identity and expression of purpose; 5. Human scale; 6. Continuity, both spatial and material; and 7. Unity, where the whole is more than the sum of its parts.

Second in rank comes its relationship to the place. Conceived for somewhere else (Bartlesville, Oklahoma,) and planted on the ever-transforming campus, it remains an odd presence within LACMA’s architectural mix. Although self-awareness gets dimmed by the quasi-religious solemnity of the place, it does not bring us to a point of ecstatic sublimity.

A personal story is relevant regarding opinions on artworks. Soon after graduating as architects in Rome, my wife and I embarked in a three-month “pilgrimage” to visit and photograph over one hundred Frank Lloyd Wright’s works across the United States. Our visit to Wright’s “Price Tower” in Bartlesville, Oklahoma, led us to Joe Price’s house (Price founded Goff’s pavilion at LACMA and donated his Japanese Collection to it.) Its golden aluminum pitched roof built in the middle of a wheat field seemed a mirage to us. We didn’t then know of the house’s existence, but we immediately recognized Bruce Goff’s hand (tragically the house was destroyed by arson in 1996.)

We rang the doorbell. Mr. Price opened the door and welcomed us. A chubby man stood by his side.

“Let me introduce to you Mr. Bruce Goff,” Price said.

We couldn’t believe it. Meeting Bruce Goff there, of all places, in the middle of nowhere.

We walked through the house. Everything was free-spirited: the inclined walls, the sunken seating area in the middle of the living room, the skylight’s light filtered by hanging feathers.

“This is so exuberant,” Ruth said. “We’ve seen many Frank Lloyd Wright’s houses, but nothing like this one. It’s great!”

“Do you think so?” said Goff. “Many people think that what I do is kitsch.”

The rock and the pavilion’s meaning for the future? Heizer’s work of public art engages the city; as such, it carries a strong message about the power of public art as urban anchors. Bruce Goff’s work remains an example of what imagination can produce with conventional building materials when design stands on solid principles.

LA is lucky to have both artworks in its midst as stimuli for thought.