A Living Room for the City 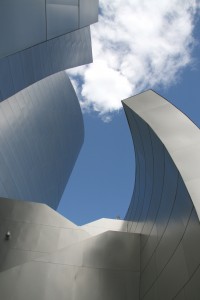 Disney Hall is an architectural triumph. It liberates creative imagination. It is also a frequently misunderstood building.

Frank Gehry’s own words in stating his intention of creating “a living room for the city” makes Disney Hall his most meaningful passing of the torch. Although he put Bilbao on the map, turning a hardly-visited Spanish port into a Mecca for architects and cultural tourists, Disney Hall is likely to have a longer-lasting impact than its Basque counterpart. Why?

1. Its urbanity. More than being an iconographic signature of undulating metal sails like Bilbao, it is an anchor that relates to Los Angeles’ climate and to the tensions of its multicultural character; it relates to the urban context of Bunker Hill as a cultural acropolis punctuated by the Dorothy Chandler Pavilion and by Arata Isozaki-designed Museum of Contemporary Art across Grand Avenue; it relates to the street; and it is inviting.

2. Its roof garden. Notwithstanding the compact beauty of the auditorium as a model of egalitarian values in which each seat offers a unique view – there are no private boxes – it is the roof garden’s accessibility from the street that makes this concert hall unique. Gehry’s design goes beyond creating a sustainability-conscious roof; he brings up a excellent example of multi-use: a cultural institution and a garden open to the public on the same footprint.

3. Its heroism. It endured a tortured construction process of 15 years that included a major earthquake; a major recession; a sightless bureaucracy; acoustic needs that demanded the design of the auditorium “as a shoebox;” having to accommodate six stories of parking; and his own programmatic objectives, that included bringing natural light into the auditorium and creating an entrance from the parking floors that would explode with skylights and a sweeping view of the street.

4.  Its structural audacity. A six-story parking modulated to accommodate parking requirements efficiently, topped by “the shoebox” placed diagonally to free space for the public roof garden, and the hanging from the box of steel ribs that allow womb-like cavities and the undulating stainless steel cladding. 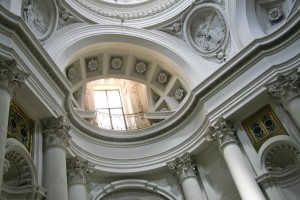 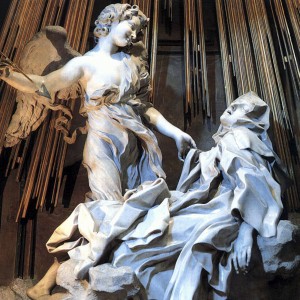 5.  Its historic reference to precedents in a subtle way. To Frank Lloyd Wright’s dynamic perception of space as awalk-through of continuous expansions and contractions, like a living organism; to Hans Scharoun’s Berlin Philharmonie of 1963, with seats arranged around all four sides of the stage; to the visual complexity of Borromini’s San Carlino of 1646 and the folding of Bernini’s sculptures, looking at Baroque as a period of artistic style that used exaggerated motion to produce drama, tension, exuberance and grandeur.

This is not the end of the story. Next door is under construction the Broad Art Foundation designed by Diller Scofidio & Renfro, the architects of New York’s High Line. It is likely to become a counterpoint to the swirling forms of the Disney Hall that will further emphasize its organic complexity.

A note on the video: during the process of conceiving an open-ended series of videos on architecture and urban design under the title Spaces for People, I decided to bring to you Disney Hall as my first architecture documentary video.  It partially tries to convey some of the building’s messages. The slowness of ascending the stairs and walking a tortuous path towards the roof garden is intentional; so is the presence of people in the images, contrary to architectural photography’s common practice of showing only buildings and empty spaces.

4 Comments on “A Living Room for the City”