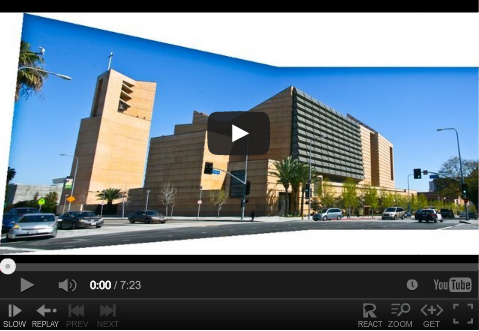 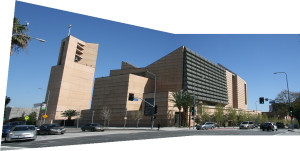 For thousands of years religion held a monopoly on spirituality in architecture. Western culture brought the spiritual into other subjects: opera houses, concerts halls, museums and memorials. Yet the images broadcasted throughout the world of people saluting Pope Francis at Bernini’s Saint Peter’s Square suggest that the subject responds to a real need.

During the past one hundred hears the building of cathedrals became rare. Has the subject become obsolete? Our Lady of the Angels Cathedral in Los Angeles provides one answer.

When the Northridge earthquake of 1994 rattled Los Angeles with a 6.7 magnitude, Saint Vibiana Cathedral’s bell tower got a forty-four vertical crack. The whole building, which had been completed in 1876, was declared “Unsafe to Occupy.” After much debate, it was decided to build a new cathedral on a new site. “It must be in downtown Los Angeles,” Cardinal Roger Mahony insisted.

In 1996 the decision fell on a sloping 5.6 acre parcel located between Temple Street and the Hollywood Freeway, and between Grand Avenue and Hill Street. It was close to downtown’s cultural axis, which includes Disney Hall, the Museum of Contemporary Art and the Central Library. It was also easily reachable by bus, the Metro and car.

To choose the architect, a jury of eleven professionals and scholars, co-chaired by Cardinal Roger Mahony and Ira Yellin, decided to devise a “sketch exercise.” The idea was to allow the jury to see how the architects thought. The competitors were required to design a small enclosed shrine dedicated to Fray Junipero Serra. The location for the exercise was adjacent to the Pueblo of Los Angeles, in a Placita where there was a statue of the Franciscan priest.

The five architects shortlisted to compete couldn’t be more different:  Santiago Calatrava, Frank Gehry, Thom Maine, Robert Venturi and Rafael Moneo. After a first round, the five were reduced to three: Gehry, Mayne and Moneo. Following several hours of intense discussion, with only one vote short of being unanimous, the Spaniard Moneo was chosen. 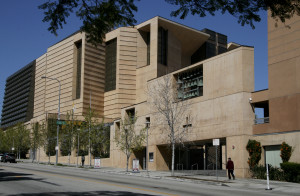 “The new site had to accommodate an ensemble of buildings, including the cardinal’s residence, the parish center and the plaza, in addition to the cathedral itself. The site plan was conceived as a complex of contiguous buildings that evoked the Franciscan missions of Southern California. The initial site-planning decisions were critical. The cathedral would be placed on the highest part of the site. The design would need to meet two requirements that seem arbitrary but that I considered essential. One was the orientation of the apse to face Rome; the other was that the cathedral had to have a traditional cruciform plan,” said Moneo.

While the second essential is not visible in the plan, the cross above the apse “acts as a gigantic, suspended altarpiece” that is readable both from the inside and the outside. “The glaze over the apse uses light as a mythical metaphor for the presence of God, manifested in the rays of sunlight pouring through it.”

The materials were selected carefully, to define the building’s character: colored poured-in-place concrete, alabaster, wood, stone and bronze. The concrete design and treatment gives nobility to a normally amorphous material. Its color reduces glare and its plainness provides continuity between the interior and the exterior. The diffused light that comes in through thin sheets of alabaster creates a luminous atmosphere.

Moneo’s cathedral brings two important typological innovations: the entrance from the apse and the reversal of the chapels towards the ambulatories. The entrance through the monumental bronze doors of the southern ambulatory leads towards a high point, marked by a Spanish baroque altarpiece. This “eye catcher” deflects parishioners from entering the nave through the reversed chapels. Once the baptismal font is reached, the wide perception of the central nave becomes majestic. The cross, the altar, the organ with over 6,000 pipes and the tapestries all play together in a symphonic orchestration.

In the cathedral’s crypt there is a chapel dedicated to Saint Vibiana. It contains the remains of a young woman put to death in the 3rd century, discovered in a catacomb near the Appian Way in 1853. Near the chapel is the crypt mausoleum, adorned with stained-glass windows depicting biblical scenes.

The main building is enriched by artworks from local artists. The two most dominant ones are Robert Graham’s bronze gates and the statue of Our lady of the Angeles above it, “a woman clothed with the sun, with the moon under her feet,” blending in its face Asian, African-American and Caucasian traits; and The Communion of the Saints on the south and north sides of the nave, which includes 25 tapestries created by artist John Nava.

The plaza provides a social counterpoint to the solemn atmosphere of the cathedral. This ample space, introverted in relation to the noisy surroundings, is an oasis with many different places to choose from for relaxation. It features three fountains with constantly flowing water: the Gateway Pool by the entrance from the street, designed by artist Lita Albuquerque, contains the words “I shall give you living water” sandblasted into the marble in 36 languages; the Jerusalem Fountain, on the northern side of the plaza, celebrates ties between Judaism and Catholicism; and the Meditation Garden Fountain, near the campanile, softens the space between the northern ambulatory and the Hollywood Freeway.

Not visible although remarkably important are the 200 base isolators upon which the cathedral sits. In case of an 8 magnitude earthquake, the building will be able to move up to two feet.

A work of such magnitude, built with the involvement of two thousand people, including Rafael Moneo as the design architect, Leo A. Daly as the executive architect and Nabih Youssef as the structural engineer, demand strong leadership and management. This was provided by Cardinal Mahoney, Brother Hilarion O’ Connor and Monsignor Kevin Kostelnik. Morley Construction was in charge of putting the pieces together with over one thousand field workers.

Beyond on-going discussions about resources, language and sustainability, the Los Angeles Cathedral is a remarkable work of architecture. It carries many lessons and it defines an identity anchor for many years to come.