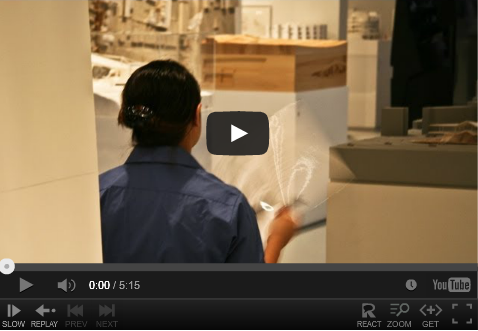 Southern California is a land of experiments. Los Angeles in particular. It is a land where many people are always inventing something. Writers, musicians, actors, animation wizards, painters, sculptors, and also architects, seniors and juniors, are continuously pushing the envelope.

The architecture exhibition  “A New Sculpturalism: Contemporary Architecture from Southern California” at the Los Angeles’ Museum of Contemporary Art is a showcase of what has been going on in the last quarter of a century. The show, born after a hard delivery and intensive care, remains stable but under observation. For readers who may want to know more about the behind-the-scenes that preceded it, Christopher Hawthorne’s article in the Los Angeles Times of June 30, 2013 is a good source.

Why is this show important?

1.   It raises awareness about some of the dreams and struggles architects go through during the process of making architecture. Notebooks, drawings and models illustrate their intentions; photographs illustrate built realities. Available on line, MOCATV also brings up interviews with some of the participating architects. Obviously “the real thing,” architecture, can only be appreciated walking through its spaces and experiencing its scale, light, forms and textures. But for people outside of the profession, the exhibition is a good “jump-start” into the complex world of architecture.

2.    It shows that some of the rebels of the 1980’s, who are now part of the establishment, continue to be rebellious on the formal agenda. 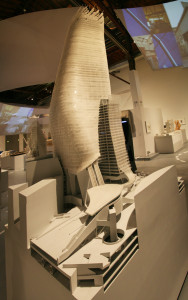 Morphosis, The Phare, Paris,
scheduled for 2017

While the computer is a tool without which many of the projects would be difficult to build within a budget straightjacket, and 3D renderings allow architects to explore perceptions before building, models allow them to have the sculptor’s approach of moving around the object. Except that… architectural models are not sculptures. In this sense, the exhibition’s use of the term “sculpturalism” is inappropriate and misleading.

Since the emergence of Italian Mannerism in the early 16th Century, architecture has gone through many “isms:” Constructivism, Rationalism, Expressionism, Brutalism, Post-modernism and De-constructivism, to name a few. In each case the term provided a concept that defined a certain philosophy and style.

“Sculpturalism” tries to pigeonhole many different directions that do not connect to one another. Does it mean “formalism?” Does it mean “architecture-as-art?” Drawings and models are not “art objects” to be contemplated and evaluated as an end product. There are tools to create spaces in which the only scale of measurement is the human scale.

The exhibition positions itself within the frame of “Southern California” and, in spite of many positives, it is self-centered and seems disconnected with a world that is creatively moving ahead in  places like China, in many European countries, in Dubai, in South Korea, to name a few. Having said that, it’s main achievement is in providing a glimpse into the world of architecture to a public that has been exposed for too long to an ocean of “merchandise that passes as architecture,”as speculative construction was called by Frank Lloyd Wright.

On a personal note: as young architects, my wife and I worked for several years in Rome, at the studio of a master-architect, Luigi Pellegrin.  Many years later I wrote a poem related to that experience that it was published in ONTHEBUS No. 2.  An excerpt:

I walk towards a double door

where a pinned business card reads

I enter a second large empty room with many drafting tables.

A couple of lamps are on. The walls are covered with dreams:

houses. Many aren’t dreams any more, they breath.

As I walk in, my pace slows down. I enter a third room.

He sits at his drafting table

holding one marker on his right hand and three on his left,

his eyes fixed on the colored lines laid on

an unrolled white paper illuminated by a single lamp.

Carlo and Marta sit by the table in silence: they know

that this is pay time for their total dedication to the master.

Without lifting his eyes from the drawing,

continuing to draw. As his hand moves on, he speaks

his mental process aloud, opening his brain to us, disciples.

He takes us by the hand like little children entering a mysterious world.

Without leaving the room

he walks us into the school evolving on his table

and as I wander through the sketch

I can feel the texture of concrete, the coldness of steel,

I can watch horizons never seen from windows never built,

I can hear the noise of children running through a corridor

or playing with water in a restroom

or bouncing a ball in a gym

or hiding candies in a locker.

The telephone rings: nobody answers. It rings again.

Carlo stands up. “I’m only for my mother,” says Luigi.

Carlo answers “The architect is not here” and comes back.

Carlo tells him. It can wait.

the draftsmen must know what to do,

the phone calls must be answered,

the letters must be written,

the clients must be pacified,

the lenders must be persuaded,

the bureaucrats must be convinced,

the engineers must be consulted,

the invoices must be mailed,

the bills must be paid,

the copies must be ordered,

the models must be built

the details must be drawn.

At via de Lucchesi 26

I am learning to see the unseen, to make it happen:

I’m learning to be an architect. 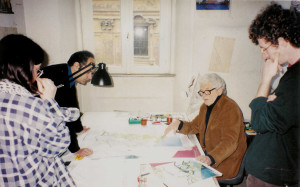