On the Making of the Wallis Annenberg

Posted by Rick Meghiddo on Sunday, December 29, 2013 · Leave a Comment

On the Making of the Wallis Annenberg from Rick Meghiddo on Vimeo.

Something is changing in LA’s architecture trends, something that may signal a new approach to design responsibility. The change is marked by the new Wallis Annenberg Center for the Performing Arts, called “The Wallis.” Designed by architect Zoltan Pali of Studio Pali Fekete Architects, it was inaugurated with a gala party on October 17, 2013. It is design with good bones and a sensitive rationality and it is relevant for three reasons: 1. its setting in dialogue with the existing urban context; 2. the symbiosis created between an historic landmark and a new building; and 3. the contemporary art language used for its expression. 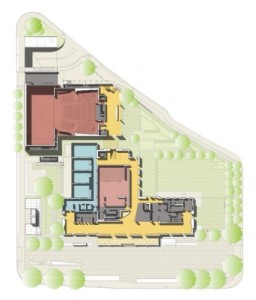 The 2.5-acre (10,000 m2) site is located at the edge of Beverly Hills’ “Golden Triangle,” where high-end shops, cafes and restaurants thrive. Pali was commissioned to design a 500-seat theater within the Beverly Hills Post Office historic Italian Renaissance revival landmark designed by Ralph Flewelling in 1934, and to add a new building to accommodate other supporting functions.

Pali persuaded his client to reverse the original idea. He proposed to build a new theater adjacent to the post office, and to use the historic building to accommodate the entrance atrium, the box office, a gifts shop, a flexible-use 150 seat black box theater, the administrative offices, three classrooms for children and a café with a sitting area on an outdoor terrace.

The building is surrounded by the Beverly Hills City Hall, designed by William Gage in 1932; by the affluent “Beverly Hills’ flats” residential area; by the “Googie” gas station designed in 1965 by Gin Wong and William Pereira; and by a non-descript office building across Canon Drive. An exterior elevator and escalator placed on Crescent Drive connects the theater to the a three-level subterranean parking garage under the City Hall, thus optimizing the use of parking space for different daytime and nighttime activities. 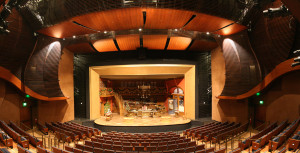 The interplay between old and new defines a series of outdoor spaces at a human scale. An east-west walkway links the City Hall with Cannon Drive and has the character of a medieval street, where one can almost touch opposite walls by extending the arms. Along the walk, the eye is stimulated by multiple views of the plaza and its surroundings. A series of windows placed in line between the old and the new buildings allows for the perception of spaces through them.

To create a contemporary building with a metaphor, Pali imagined a story based on the millions of processed letters “coming back.” He turned the skin of the new theater into an abstraction of envelope-shaped panels in copper-colored concrete. The result is a texture of patterned “envelopes,” each slightly different from the other. The enclosure partially conceals the mechanical equipment, engineered to avoid noise and vibrations from getting into the theater’s space.

To accommodate the backstage height within zoning high limitations, Pali sank the Goldsmith Theater about thirty feet (9 m.) below the street level. By doing so, he created a difference of level of about twenty feet (6 m.) between the entrance and the street that he bridged through a cascade of terraced steps and gardens, designed by landscape architect Ron Lutsko. This tactic gently brings down the audience from Canon Drive.

The theater’s interior, which Pali calls “the room,” has a conventional floor plan. It is enclosed by a series of waving forms in dark wood that can change according to acoustic uses of the space as a theater, for concerts and ballet performances, for a lecture or for film. The large state-of-the-art backstage, not seen by the audience, has a dramatic aesthetics of its own.

The original murals by Charles Kassler that decorate the arches of the post office atrium have been restored, and new artworks are beginning to pour in.  A Roy Lichtenstein sculpture, “Coups de Pinceau,” has already been installed on the corner of South Santa Monica Boulevard and Crescent Drive. It defines a clear point of reference through the use of public art.

At the direction of Wallis Annenberg, the Annenberg Foundation provided major funding towards the restoration and re-purposing of the historic post office building into a performing arts and cultural facility. Key to the design success of the seven-year-long process was the interaction between Pali and the Executive Director, Lou Moore, who brought with her a long experience in the theater world.

Pali greeted us in the spacious Culver City studio created by him and his partner, Judit Fekete, the managing principal of the firm, whom he introduced to us. While Pali is a native of Los Angeles and the son of an Hungarian engineer emigrated to the United states after the Soviet crash on Hungary of 1956, Judit Fekete was born and raised in Pécs, a city south of Budapest founded by the Romans in the 2nd Century. This European background on LA’s fertile soil resulted in the flourishing a broadminded design firm.

We were immediately impressed by Pali’s genuine character. His clear thinking derives from a good education on architecture’s basics, from no-nonsense approach to human problems and technology, and from a poetic sensitivity unaffected by fads and mannerist formalisms.

The Wallis brings a healthy freshness to LA’s contemporary architecture scene and gets it closer to the modern approach that sees historic restoration as the blending of the past and the present into a unity belonging to the times.